The Harmonic Archipelago Group is not Free

of the earring space

(called the earring group) is not free (Part I and Part II). Playing a key role is an explicit description of the earring group, which allows us to make arguments without having to discuss loops.

Now I’m going to work through an interesting property of another important group: the fundamental group of the harmonic archipelago 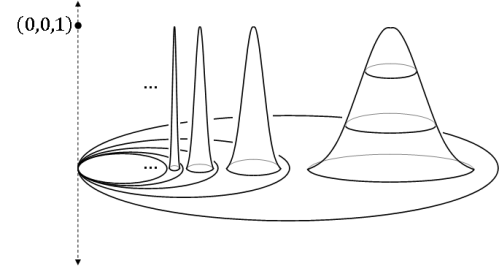 In this post, I’m going to try to convince you that every homomorphism

to the additive group of integers is trivial. In other words

. This may seem a bit strange considering

is uncountable and torsion free.

on a solid disk and pushing up a hill of height one in between each of the hoops. Notice that the earring space is naturally a subspace of

is basically just a really bumpy disk that differs topologically from a disk only at the one wild point of the earring space.

, we have an induced homomorphism

. In my first post on the harmonic archipelago, I argued that

is surjective and hence that

is a natural quotient of

is the homotopy class of the loop going once around the n-th circle of the earring space, then

is the conjugate closure of the set

. This is essentially because

as attaching maps. Unfortunately, the characterization as

is a locally free group (“locally free” means that all finitely generated subgroups are free). However, it’s still not completely obvious that

is not an uncountable free group; we’ll rule that out in this post too.

is not a free group. These facts are Lemma 4 from Part I and Lemma 6 from Part II respectively.

Fact I: For every homomorphisms

is a homomorphism such that

. According to Fact I, there is an

. Now according to Fact II, we have

is not isomorphic to a free group.

Proof. There is no non-trivial free group

such that every homomorphism

One might be tempted to conjecture that the groups

are isomorphic since they are both uncountable, torsion free, locally free, and we get

by introducing countably many relations in the uncountable group

. Now it is clear that this cannot be the case.

is not isomorphic to

as we saw in my last post. For example, the retraction

2 Responses to The Harmonic Archipelago Group is not Free