be a homeomorphic copy of the torus for all

corresponding to the identity element of

be the shrinking wedge of the sequence

. In particular, the underlying set is the usual one-point union

for all but finitely many

This space can be embedded in 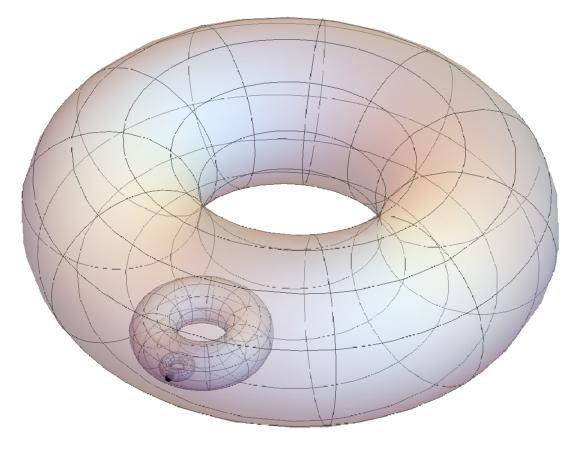 be the wedge of the first

-tori and notice that

is the free product of

. These form an inverse system to which there is a canonical homomorphism

. It follows from results in [3] that

Note that the space

and attaching a sequence of 2-cells

along the conjugating loops

represents the loop traversing the

. We can then give this relative CW-structure the topology so that every neighborhood of the wedgepoint

contains all but finitely many of the 2-cells

The infinite earring as a subspace of the shrinking wedge of tori.

In this way, we see that

, that is, between the infintie earring and infinite torus. This construction also makes it clear that

can be realized as a quotient of the earring group

, where any finite or infinite appearance of the attaching loops in an element of

becomes trivialized. For instance, given our attaching loops

in the quotient.  To make this precise, it is necessary to trivialize conjugates of the loops

and shrinking sequences of such conjugates. This is more intuitive than precise, but this is not the place for a precise treatment.

is not locally free).

is aspherical. This is proved in [1], which extended the ad-hoc approach for

, see [1, Theorem 1.6]. I imagine that first homology is abstractly isomorphic to

but I don’t recall seeing this proven anywhere yet.

Other notes: If you collapse the bolded earring in the second image, you get the 2-dimensional earring space