The Warsaw circle is a well-known path-connected space that involves the usual topologist’s sine curve. This space provides a fundamental example in shape theory. Specifically, one many construct it as: 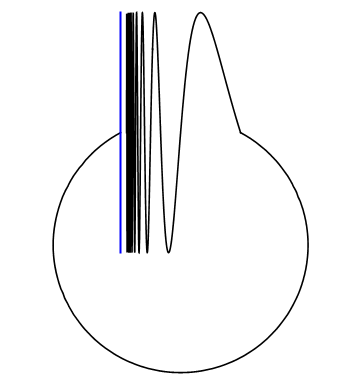 The Warsaw circle. The blue vertical arc is a limiting set of points for the topologists sine curve. The circular arc is attached to make the space path connected.

Other names: Polish circle. The names “Warsaw” and “Polish” honor the many contributions of Polish mathematicians to topology, e.g. Karol Boruk’s development of shape theory.

Topological Properties:  Planar, 1-dimensional, path-connected, compact metric space. This space is not locally path-connected at any point in the arc

Homotopy and homology groups: The space

is weakly homotopy equivalent to a point, i.e.

is trivial for all

Homotopy Type and Shape Type: The Warsaw circle is shape equivalent to the unit circle. When one “thickens”

in the construction above by any

, the resulting space is homotopy equivalent to a circle. It follows that

is not contractible since it is not shape equivalent to a point. This provides a counterexample of Whitehead’s theorem in the category of compact metric spaces.

is locally simply connected in the weak sense that every

has a neighborhood base of open sets

for which every path-component of