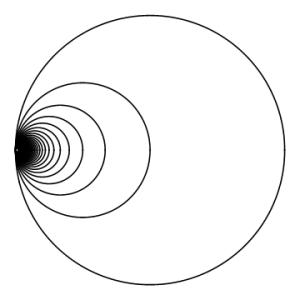 Other Names: infinite earring, 1-dimensional earring, shrinking wedge of circles, shrinking bouquet of circles, clamshell. This space has often been referred to as the “Hawaiian earring” in the literature; however, there is substantial movement by experts to stop using this term.

Universal Property: given any sequence

of loops based at

converging (in the compact-open topology) to the constant loop at

, there exists a unique map

is the canonical counterclockwise loop traversing the n-th circle. This universal property is a special case of the loop space-suspension adjuction.

embeds as the subgroup of the natural inverse limit

is sometimes called the free-

Wild Set/Homotopy Type: The wild set is the single-point set