The topic of this post focuses on a general concept that is heavily used in the wild topology world. Writing this post has been a fun exploration I’ve been meaning to spend time on for a while now. I will assume that all spaces involved are Hausdorff.

is (homotopically) reduced if either

is constant or if there is no interval

is a null-homotopic loop, i.e. if

There are some other, more geometric, notions of “homotopically reduced” that are good for other purposes but this one is particularly relevant for one-dimensional spaces. Soon, we’ll combine new stuff with an old post to see that every path in a one-dimensional Hausdorff space is path-homotopic to a unique reduced path (unique up to reparameterization). Just as the uniqueness of reduced words in free groups is central to their theory and applications, the same kind of uniqueness for homotopy classes is important for proving things about fundamental groups of one-dimensional spaces.

History: The idea behind reduced paths in the one-dimensional case is based off of Curtis and Fort’s work in [2] from the 1950’s. I should note that Curtis-Fort use the notion of a “normal loop” which permits constant subpaths and is not exactly the same as in Definition 1. The modern definition of “reduced path,” which is far more effective for applications, does not permit constant subpaths. This modern version appears to appear first in Section 2 of Eda’s 2002 paper [3]. There is also a nice proof in Cannon and Conner’s outstanding 2006 paper [1].

Fun question to ponder: What do you think a homotopically reduced map

Let’s start with some basic observations.

What I’d like to do in this post is discuss the existence of reduced paths in homotopy classes. When can we be sure that a path

is path-homotopic to some reduced path?

Say we start with a non-constant path

. We want to “pinch off” or delete subloops which are null-homotopic loops. If you want to pinch things off one-by-one you’ll end up in an infinite deletion procedure, which could get pretty messy. So I think we should try to delete infinitely many subloops at a time. For example, if you have an infinite concatenation

is an infinite concatenation of null-homotopic loops, this product itself might not be null-homotopic. This phenomenon occurs precisely when the space in question fails to be homotopically Hausdorff, a concept very relevant to this post.

A Lemma about deleting constant subloops

Lemma 2: For every path

, there exists a non-decreasing continuous function

and a nowhere constant path

be the set of

is locally constant at

, i.e. there is an open neighborhood of

be the connected components of

and notice that if

must have disjoint closures. We give

the natural linear ordering inherited from

A little real analysis will finish the proof that

is a well-defined, continuous, non-decreasing function. As a specific example, if

is the complement of the middle-third Cantor set, and we choose the

to be the dyadic rational that is the midpoint of

will be a modified version of the Cantor function. 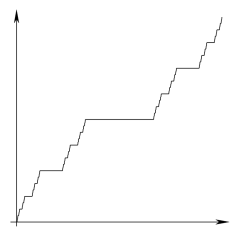 Let’s finish this argument. Since

is constant precisely on the components of

is a quotient map, and

is constant on the fibers of

, there exists a unique map

How do we know

is nowhere constant? Suppose otherwise that there exists

is non-decreasing, continuous, and onto there exists

and so we must have

. By the definition of

is a single point in

cannot be constant on any open subset of

Here’s why that lemma is a useful and necessary starting place: Since

are path-homotopic by the homotopy

, we can go ahead and delete a maximal family of constant subloops in one single step without changing the path-homotopy class. Hence, toward our goal for this post, we may assume from the start that

But….to proceed we should dissect the proof to formalize the idea of “pinching off subloops.”

to be constructed. In fact, given any open set

and the choice of a point in each connected component of

, we can construct the function

. We’ll refer to such a function as a collapse function for

is a collapse function for

is a path and

is a closed set such that for each connected component

maps the two points of

to a single point. If

is a collapse function for

, then there exists path

is the same as

except that you force it to be constant on each component

Altering a path to be constant on a given (possibly infinite) family of subloops.

is now constant on each component of

is a quotient map and

is constant on the fibers of

, there exists a unique path

Now this new pinch-off lemma is, in a way, much stronger than our first lemma. But we must be responsible with all this power. It just says that we can always pinch of subloops to obtain some continuous path. It doesn’t say that the result will be homotopic to the original….The resulting path will be “obviously” path-homotopic to the original only if we’re pinching off just finitely many null-homotopic subloops.

Definition 5: A cancellation of a path

of disjoint, connected open sets in

such that for each

be the set of all cancellations of

has a natural partial order: given

is a maximal cancellation of

, then the elements of

have disjoint closures. For if we have

, violating the maximality of

So, we want to know two things:

We’ll work to answer these questions in Part II.