The Whitehead theorem in homotopy theory basically says that to fully understand the homotopy type of a CW-complex one only needs to know about the homotopy groups (really, the weak homotopy type). It is very easy to produce spaces to which Whitehead’s theorem doesn’t apply. For instance, consider an infinite wedge

of circles and the one-dimensional space

: a wedge of converging circles

There is clearly a continuous bijection

, which induces an isomorphism on all homotopy groups. However,

are not homotopy equivalent because the topological fundamental group of

, which is a homotopy invariant, is discrete while the topological fundamental group of

Heavier machinery is required to differentiate spaces which are more complicated on a local level than CW-complexes. One of the most traditional approaches to this problem is Shape Theory, initially developed by Carl Borsuk and refined and expanded in the 1970’s by many, including the authors of [1].

A common technique in mathematics is to approximate complicated objects by simpler ones. For instance, approximating functions in Calculus by Taylor polynomials of increasing degree. This is basically the approach of shape theory: approximate complicated spaces by simpler ones, in particular polyhedra (spaces built out of line segments, triangles, tetrahedra, etc.). Borsuk, the inventor of Shape Theory, first used ANR’s to study the topology of compact metric spaces. The more modern approach pioneered by Segal and Mardesic [1] is categorical in nature and makes heavy use of inverse systems of polyhedra.

Though Shape Theory helps a great deal in our understanding of complicated spaces; however, it has its limits (pun intended). For instance Shape Theory tells you absolutely nothing about the Griffiths Twin Cone because it is “shape equivalent” to a point!

So where do we start?

Let’s look at the Cech Expansion of a space

. This is supposed to let us approximate spaces by simpler ones. We’ll start with an open cover

. Even when you forget about the points in each set

, the open cover still gives a vague picture of

. For instance, take the following cover of the unit circle

as a subspace of the plane.

Now forget about the points in the space. 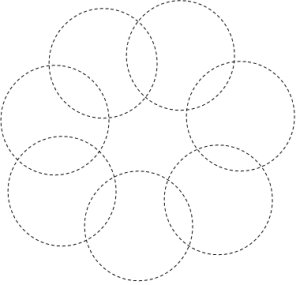 The shape left still closely resembles that of a circle. We can even recover the circle from this data: replace each open set with a point. If two open sets intersect, draw a line segment between the two corresponding points.

We get a polyhedron homeomorphic to the circle. It isn’t usually true that we will get back the original space; this only happens in very special cases and for very fine open covers.

The nerve of an open cover

Definition: An abstract simplicial complex is a set

consisting of finite subsets of

. A vertex or 0-simplex is a singleton

and an n-simplex is a set

is an open cover of

, we construct an abstract simplicial complex

called the nerve of

is a finite set

is a geometric complex obtained by pasting simplices together using

Definition: The geometric realization of an abstract simplicial complex

is the topological space

defined as a subset of the product

is the set of functions

the weak (or induced) topology so that

for all finite sets

is topologized with the subspace topology of

It is common to write the simplex in

is defined as the geometric realization of the nerve, it is a bit more intuitive to think of it in the following way.

Here is the cover:

0 skeleton – A vertex of

, then place an edge (1-simplex) between

, then there are three edges joining each pair of the vertices

. Place a triangle (or 2-simplex) so that the edges of the triangle match up with these three edges. In the picture, fill in the each empty triangle with a triangle.

, attach a tetrahedron to fill in the boundary that exists from the four triangles.

Input the tetrahedron into the place where it obviously goes (on the right).

In our example, we stop here and leave it embedded in

. In general, you would continue to add higher dimensional simplices and give the resulting geometric simplicial complex the weak topology. In addition, the space might not be compact and open covers would typically contain infinitely many sets.

Here’s an observation we can go ahead and make. The order of an open cover

(if it exists) is the smallest number

such that every point

. Hence, if the order of

distinct elements can intersect and

can only have simplices of dimension

Proposition: If the order of

is supposed to be an “approximation” of the original space

. What if it is a bad approximation? You should take a “closer look” at

by using a finer open cover of

is a refinement of another cover

since there are more sets in

. It makes sense to think of

as being a better approximation to

since if we collapse the appropriate simplices of

, we get back something homotopy equivalent to

. This is captured in the next proposition.

is a refinement of another cover

induced on geometric realizations is unique up to homotopy.

on vertices (i.e. elements of

. Any map defined in this way is called a projection.

The same goes for higher simplices; if

and we send the simplex

. This gives a well-defined simplicial map on the nerves.

Though it seems like there is a lot of freedom in defining a projection, the choice is independent of homotopy. By construction, any two projections

is a refinement of

is a refinement of

is a canonical map. Thus if

is another projection, then there is a homotopy

denote the homotopy class of

, we have strict equality

. Therefore, since open covers of

, we have an inverse system

of homotopy classes of nerves of covers.

Definition: For a paracompact Hausdorff space

, the Cech Expansion of

is the inverse system

in the homotopy category of polyhedra.

Of course, even if

is not paracompact Hausdorff, you still get an inverse system; the problem with non-paracompact spaces is that it is much harder to relate

4 Responses to The Cech Expansion: nerves of open covers