A pair of integers

is dyadic unital if the dyadic rational

. For each dyadic unital pair

be the base arc. The dyadic arc-space is the union

over all dyadic unital pairs with the subspace topology inherited from 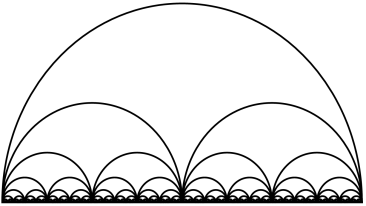 Utility: Used in [2] to characterize the existence of generalized universal coverings (as defined in [3] and extended in [1]).

embeds as the subgroup of the natural inverse limit

of finitely generated free groups. This group may also be described in terms of a reduced path calculus.

must be homotopy equivalent to 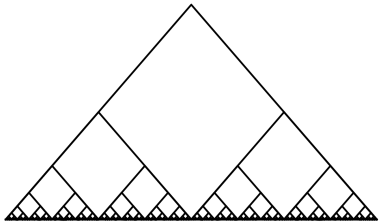 The dyadic arc space is homotopy equivalent to the “triangle continuum” seen on the right, which appears in [3] and [4].

Other Note: If you collapse the base arc to a point, you get a space homeomorphic to the infinite earring.